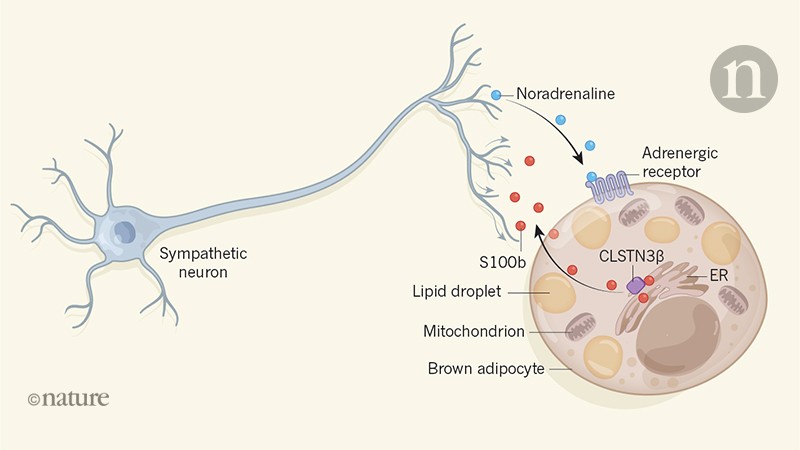 The immune system is the lynchpin of communication between the digestive tract, lymphatic system, nervous system and metabolism of all tissues. This seems at first a huge statement but is relatively well documented and when all the pieces are brought together makes complete sense.

Let’s first start with understanding one thing, we are innately designed to survive, what helps us do that feels good, what hinders that process feels bad, and just to clarify survive is not just a reference to a singular life span but the spreading of progeny as well. Simple tasks like eating we would not do if they had no positive correlation and things like hunger we would not avoid if they had no negative correlation, we have opioid receptors in our brain that are there by design. This is not so we could get high off some plant but so our brain that makes these chemicals can release in response to certain scenarios. What controls the secretion and sensitivity of these molecules and their subsequent receptors are cytokines broadly speaking which are the main tool of the immune system. Cytokines also modulate hormones, neurotransmitters and other signalling molecules secretion and reception. Cytokines can increase or decrease the ability of signal transduction by any of the previously mentioned molecules, making them the perfect tool to communicate systemic status pulling distal tissues in line with more local responses depending on the hierarchy of signals.

The immune system travels through the blood, the lymphatic system and reside in tissues, the brain even has its own specialised central immune system with specialised versions of the immune cells. Even elements such as the microbiome are slaves to the immune system as the immune system is exactly what regulates the number and diversity of the microbiome on all our surfaces. Our external environment will have an effect on our microbiome but what truly controls its basal status is our immune system. This means that wherever there is a biome, brain, guts, skin and lungs there is a 24/7 immune response occurring. What is super interesting is how the severity of immune responses are regulated and how this is the key, not just microbiome behaviour, but all tissue behaviour, including fat mass. Monocytes circulate in the blood and are one of the sentinel-like cells of the immune system, they patrol looking for signs of stress, oxidation and infection. A process called chemotaxis where immune cells such as monocytes and others are drawn to an area/tissue by signalling molecules, such as but not limited to, cytokines occurs when monocytes leave the blood to enter a tissue, this is also called migration and, migration is closely linked to healing capacity. If we see too much monocyte migration or too little, both spell trouble for the healing process.

When we enter a sympathetic state otherwise known as the fight or flight response our immune system is primed for action due to the potential wound, we may incur while running or fighting from danger. This open wound will not only need an active immune system to heal but to manage any pathogenic bacteria that may be present in our environment at the time. The mechanism of action of this monocyte priming is increased glucose and LDL levels in the blood, one of the sympathetic responses primary functions is to increase energy availability to the periphery, hence increased energy availability signals the immune system to be on alert. When on alert a few basic components of monocyte behaviour change via epigenetic activation, firstly increased migration and adherence (the ability to stick to other cells or tissues), this increase in migration already sets the stage for changes in tissue behaviour before we start to consider changes in cytokine production that I will detail soon.

When a monocyte enters a tissue, it ceases to be a monocyte anymore and becomes a macrophage, meaning big eater. Now, macrophage behaviour in tissues is very well researched and if we simplify it here, we can see two types of macrophage seen in healthy vs unhealthy tissue called M2 and M1 respectively. To clarify healthy vs unhealthy is of reference to normal vs inflamed or normal vs obese, M1 has a much more pro-inflammatory nature than M2. It has been shown that a monocyte maintains its memory of priming when it enters a tissue, which influences its state such as M1 vs M2.

This starts to lay the foundation for changes in tissue behaviour and increased susceptibility to physiological stress, it reduces healing potential of damaged tissue, due to increased migration as noted previously, and changes cytokine proliferation.

Cytokines are inflammatory molecules, they can be anti or pro-inflammatory, they have powerful roles within healing and cell proliferation. 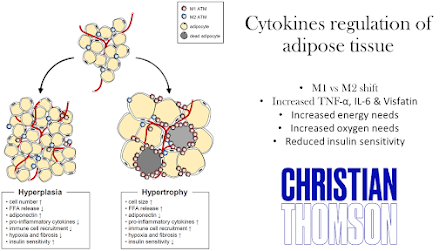 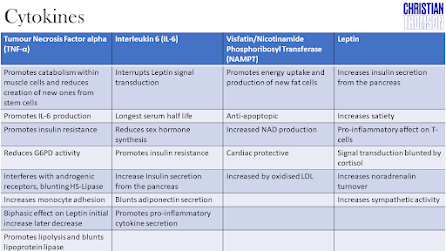 As you can see in the images above M1 shifts are bad news for fat cells and when our immune cells get stuck into proinflammatory cascades a perfect storm can occur setting us up for a tough time to remove excess fat. TNF-α promotes IL-6 which disrupts Leptin, all of which disrupts insulin sensitivity and action not to mention other sex hormones. Together this cascade promotes muscle catabolism, fat cell anabolism, increased sympathetic drive and reduced digestive capacity.

Before we discuss effects on digestive capacity first let’s take a moment to consider the effect of excess glucose, LDL and adrenaline on the liver. Excess adrenaline will work to signal cortisol as it’s a less potent molecule with a longer half-life that plays a similar role, next we must consider what body is going to do with an excess of all these molecules, especially considering our sensitivity to them is reduced so less of them are taken up and used. We have a fantastic machine at removing excess materials like this called the liver, but for the liver to do its job it needs materials or resources called micronutrients. Magnesium & vitamin C are among two of the most common nutrient deficiencies found in the modern world, they are vital to both the synthesis and degradation of many of these molecules. The liver has 3 phases of detoxification, phase 1 breaking molecules down, phase 2 conjugation into less harmful, more soluble molecules, phase 3 removal via urine or bile.

Now we have spared a thought to the liver lets quickly turn our attention to digestive capacity, it’s important to remember at this point, many of these reactions will be pushing our autonomic balance towards the sympathetic end. The sympathetic nervous system has direct inhibitory effects on digestive secretions that function in a cascade-like way. Stomach acid release functions to activate enzymes and signal the release of hormones that act to release other digestive secretions like bile, bicarbonate and pancreatic enzymes, not only is the SNS inhibiting all of them simultaneously it also reduces the stimuli that would help produce the secretions creating a multiplier effect as we go down the chain. This does not result in total inhibition but does cause inflammation of the GI tract and bacterial issues due to undigested or poorly digested food.

This all acts to reduce nutrient breakdown and assimilation, reducing the input of micronutrients that are now in much higher demand, when resources/micronutrients get low, certain pathways are down-regulated and further exacerbates immune system dysregulation as fat-soluble vitamins will be some of the first to suffer. Vitamin D & A, for example, are vital in T-reg cell activity which regulates the reactivity of the immune system and K2 which is vital in regulating osteoclasts, the key cell type that controls the sympathetic response. This can result in a reduction of energy used as fuel to conserve life or simply a shift in fuel use, in short, the body will adaptively change its behaviour to survive.

This scenario described is a sliding scale, but represents key points at why the advice eat less move more while good advice on the face of it may actually be dangerous and damaging. For those who are in the grasp of metabolic or immune dysfunction which is much of the western population eating less leads to lower micronutrient availability and general resources needed to solve the issues at hand. Moving more is often taken as train harder by most which in a state of over-stimulated sympathetic drive will only act to worsen autonomic balance at rest which is where we spend most of our days.

This does not mean we should eat tons and move less either it just means that more consideration needs to go into every person own strategy for better health. Those that have poor metabolic flexibility and do not burn fats well at rest will not get good results from any form of fasting while those with good metabolic flexibility will. Those with heightened sympathetic tone will not respond well to intense exercise or high fat or protein diets due to poor digestive capacity. They may actually need more carbs to help liver conjugation of excess stress hormones and glucose.

In the end, it comes down to TEST DON’T GUESS, you don’t know if you don’t look.